With the close of the first quarter of 2017, there have been some interesting patterns developing in AliceStorm.  Let’s start with the big picture: There was a flurry of activity in March, with a record number of Section 101 decisions.  The Federal Circuit issued 11 decisions alone (its highest monthly output), and the district courts contributed another 24 (third highest month).  However, the overall percentages of invalidity outcomes are stable as compared to last month, which is really more a reflection of the law of large numbers: there have been so many Section 101 decisions that the total percentages are not going to change significantly month to month. Here we can see the record spike in decisions in March: The columns are the quarterly total number of eligible and ineligible decisions, and the red dashed line is the percent ineligible per quarter.  Again, we can see the slow decline in ineligible outcomes. Where is this change occurring?  Let’s look at the most active district courts in terms of volume:

This table compares the number of Section 101 decisions and the percent of ineligible decisions in the period from Alice to the end of Q3-2016, with the last six months (Q4-2016 to Q1-2017).  Most of the active courts are significantly down in terms of the percentages of Section 101 motions granted, with one very important exception, the Eastern District of Texas.  The court’s ineligibility decision rate has jumped dramatically over the last six months, up to 75%.  That’s definitely a change of tune for a court that has historically been patentee-friendly. Turning to the motion summary: 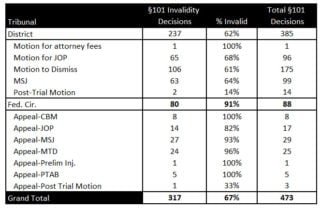 Motions for judgment on the pleadings still hold the edge for patent defendants for early dispositive motions.  The Federal Circuit continues to affirm PTAB ineligibility decisions, with one CBM and one ex parte decision affirmed in March. Here’s the updated Federal Circuit scorecard: Here are the 11 Federal Circuit decisions:

Chief Judge Prost and judges Dyk and Lourie continue their unbroken streak of finding every software related invention patent-ineligible. I’ll dive into the details of the Thales decision in my next post.   Update:  4/21/17 In the comment below, Patent Practitioner asks if we’ve normalized PTAB and federal court outcomes based on prosecution dates “post-Alice.”  I interpret this to mean whether there is a difference in the invalidation rate for patents issued after Alice versus those issued before.   For the federal courts, there is a significant difference as shown here: