CLA’s (Criminal Leave Applications) are petitions to the Court of Appeals, NY’s highest court, asking it to review a decision by a lower court. But, as those who are familiar with Court of Appeals practice know, these CLA’s are handled quite differently than other matters.

That latter reality is what makes the one-Judge decision-making on CLA’s so inconsistent and inequitable. CLA’s that are distributed to and decided by a particularly generous Judge are much more likely to be granted. Those that are distributed and decided by a more stingy Judge, much less likely. Indeed, whether or not a criminal appeal will be granted–i.e., whether the Court of Appeals will ever review a decision of a lower court–depends in large measure on the luck of the draw. Was the CLA distributed to a more generous Judge? Or to a more stingy one?

So let’s take a look at records of the Court of Appeals Judges. Which Judges have been comparatively generous in granting CLA’s? Which have been less so? To be blunt, for those who seek review of their criminal cases, which Judges give them a better chance? And which Judges make their chances worse?
(I have done similar studies on CLA’s while Jonathan Lippman was Chief Judge [see NY Court of Appeals: Granting Criminal Appeals–Up, Down, Now Up Again? (Part 10: Who’s Granting Now?), and the preceding Parts]; and early in Chief Judge Janet DiFiore’s tenure [see NY Court of Appeals: Steep Cut in Criminal Cases (part 2), and preceding Part].)

Here are the figures for the Court of Appeals Judges for calendar year 2018. How many CLA’s did each one grant in the immediate past year? 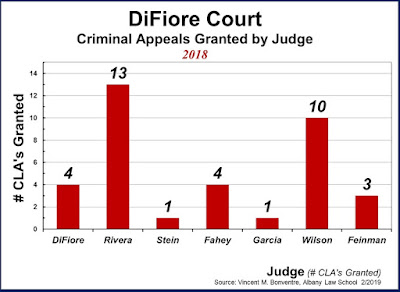 As the graph makes clear, there were sharp contrasts among the Judges. Judges Jenny Rivera and Rowan Wilson granted far more criminal appeals than their colleagues. At the other end of the Court’s CLA spectrum, Judges Leslie Stein and Michael Garcia granted the fewest.

For a different perspective, let’s just rearrange the data from seniority of the Judges to the number of grants.

(click on graph to enlarge)
From Rivera and Wilson to Stein and Garcia, there was quite a spread. The significance of these figures is underscored by the fact that the CLA’s are distributed randomly and equally. There is no indication that some Judges were deliberately assigned the easier CLA’s while others the more difficult ones. Nor that some Judges were assigned an inordinate share while others many fewer. Indeed, when each Judge’s CLA grants and denials are totaled–as I have done–the number decided by each of them in 2018 was ~300.
With that in mind, the somewhat curious conclusion–if not entirely disconcerting to those who file CLA’s at the Court, as well as to anyone who prefers a more equitable system–is the stark disparity in the actual frequency with which the different Judges have granted CLA’s. Judge Rivera granted more than 4% of the CLA’s assigned to her. Judge Wilson, more than 3%. On the other hand, Judges Stein and Garcia granted less than 1%.
What becomes clear–and what many lawyers who do criminal appeals already know too well–is that it has been much more likely to have a CLA granted if it has been assigned to either Judge Rivera or Wilson. That means a much better opportunity to have the Court of Appeals hear a criminal appeal if one of those two Judges gets the CLA.
And the opposite of course has been true if others on the Court got to decide.
It’s no wonder that so many members of the bar, including former Court of Appeals Judges, as well as bar organizations, believe that the CLA system must be changed to insure much greater equal treatment in the process.
Next, we’ll look at CLA grants by the Court as a whole over time.