The EEOC’s revised EEO-1 form, which now includes employee pay data, must be filed for covered employers for calendar years 2017 and 2018 by September 30, 2019. Remember that EEO-1 forms are required of all employers with 100 or more employees, as well as federal government contractors who have 50 or more employees and contracts of $50,000 or more. The EEOC posted updates for the new reporting requirements here.

The EEO-1 now must include W-2 earnings for all employees within an EEO-1 job category by placing those employees within 12 “pay bands.” For example, when using “pay band 4,” an employer would place a number within each EEO-1 job category representing the total number of employees in that category who made between $30,680 and $38,999 gross for the prior 12 months, all sorted by gender and race of course. On a later page of the form, the total number of hours worked for each category must be included. An example of the form is below and can be downloaded from the EEOC website portal. 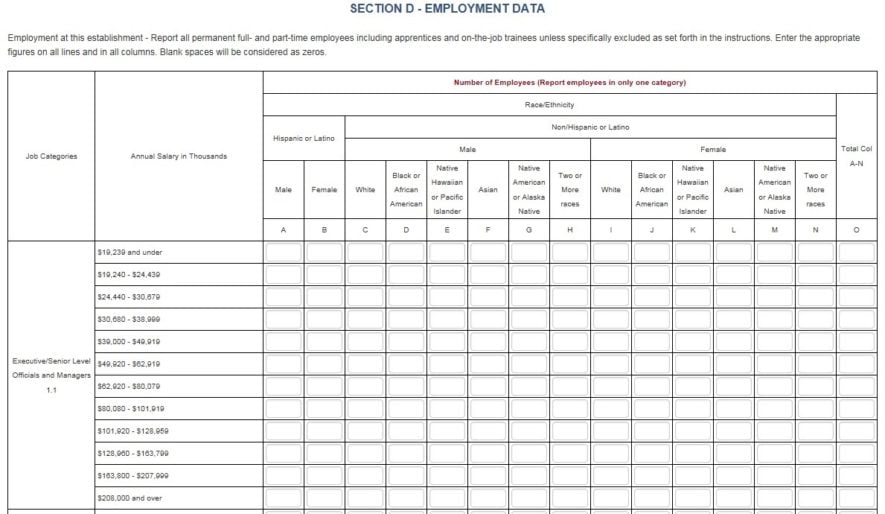 Employers may recall that the new pay reporting requirements were first introduced in 2016. Much has happened since our original post, including a stay of the new requirements, but we basically are back to where we started, with new requirements for including pay data now in effect.

The way “we got here” related to the change in administrations in 2017. After the EEOC issued its new rule, it was approved under the procedure of the Office of Management and Budget (OMB) in 2016 before the presidential election. About a year later though, in August 2017, the OMB reconsidered its decision, announced that the new rule was overly burdensome and lacked utility, and stayed its prior approval. Lawsuits by interest groups quickly followed challenging the OMB’s reconsideration. Federal District Judge Tanya Chutkan in D.C. sided with these groups and found the OMB’s new decision to be “arbitrary and capricious.” The court thus vacated the stay from 2017 and ruled that the new reporting requirements should go into effect immediately. That judicial decision was issued on March 4, 2019. Readers may recall that, during this time frame, the federal government underwent a “shutdown” which resulted in the EEO-1 submission date being extended to the end of May 2019. The EEOC again extended that deadline until the end of September 2019.

And, yes, an appeal has been filed, so stay tuned. However, Judge Chutkan’s order has not been stayed, so her decision is the current state of the new reporting requirements.

The burden related to filing EEO-1s has obviously increased significantly and the time frame is short. Employers have a lot more data to gather. This data no doubt comes from different sources within a business. The ultimate information provided could be used against the employers submitting it. So, regardless of what may happen in the future, companies should begin compiling this data immediately and double checking to ensure that it is very accurate.