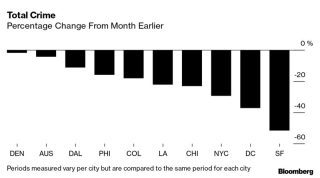 Among the virtues of blogging for me is a deeper appreciation for the responsibilities and the challenges of effective journalism.  And these days especially, I am disinclined to attack the press.  But I just cannot help but saying “AARRGGHH” in this space while reporting on this notable new Bloomberg piece about crime in cities in the early COVID era.

The piece details that, generally speaking, crime is down in major cities.  But you would not get that from the piece’s headline, which now blares “Some Crimes Are Spiking in America’s Major Cities.”  Aggravating headline aside, the piece is an interesting review of original data, and here are excerpts:

Amid empty streets and shuttered shops, crime rates in some of the biggest U.S. cities have dropped — with a few exceptions.

Car thefts and store robberies are spiking in some municipalities even as crime overall — especially violent offenses — dropped in 10 of the 20 most populated cities, more than halving in San Francisco alone. according to a Bloomberg News analysis of data from 10 major cities.

“It’s just a reflection of reduced opportunities for these kind of events,” said Daniel Nagin, a criminologist and professor of public policy at the H.J. Heinz School of Public Policy and Management at Carnegie Mellon University in Pittsburgh. “In the case of murders, these often occur in public places in bars and things like that. With those kinds of activities shut down there’s less social interaction.”

Car theft is one exception, at least in some places. In New York it’s surging, up 49% for the week ended April 12 as compared to the same period a year earlier. It’s risen 53% over the past month and more than 63% year to date. Police have increased patrols in areas of the city where car thefts are common. Car theft was the only major crime to show an increase in Los Angeles, rising 11.3% for the 28 days ending April 11 from the previous period.

Burglaries are also on the rise in New York, up 26% year-to-date as compared to the same period in 2019. In the week ended April 12, they more than doubled in the southern half of Manhattan, where many stores are now unoccupied. Burglaries jumped almost 34% in Denver in March amid a growing number of break-ins at marijuana dispensaries. In Philadelphia, burglaries were down 6.7% overall, with residential break-ins falling 25% as more people stay home, but unoccupied businesses were hit hard, with commercial burglary rising 71%….

Each of the 10 major cities that provided data are showing a decline in rapes and sexual assaults, with San Francisco posting the biggest drop — more than 50% — as compared to the same period a year earlier. Kubrin said, however, that these numbers aren’t a reliable indicator because the crime is notoriously under-reported, in part because of reluctance by victims to go to the police.

For the most part, murders are on the decline, and in cities showing a rise the numbers are low to begin with. A 25% increase in Austin, for example, is the result of one additional homicide, with the number rising from four to five…. Most cities are showing a decline in assaults, following the trend in other violent-crimes categories.