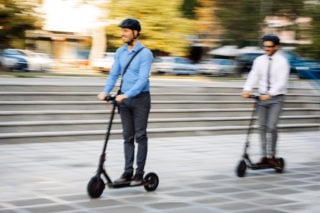 Back in January, we reported New York Governor Andrew Cuomo’s veto of legislation that would have amended the state’s Vehicle and Traffic Law to define and legalize the statewide use of electric scooters and electric bicycles. The veto, which came somewhat as a surprise to observers because of the lack of any significant opposition in the legislature, disappointed supporters of the bill. Supporters of the proposed legislation argued that New York was one of the few remaining jurisdictions in the country that had not yet legalized what they described as a safe, sustainable and affordable way of moving away from automobile traffic and supporting a large part of the state’s urban-based economy.

As enacted, the new law gives Cuomo the additional safety measures he desired; namely, the requirement for the use of helmets, lower speed limits and provisions addressing use while intoxicated. Still, the budget provision is considered a major win for those who advocate for New York’s working poor. Electric bicycles in particular are seen as vital to immigrant workers who previously faced steep fines and confiscation of their throttle-assisted bicycles when using them to make food and grocery deliveries.

Post-pandemic, will New Yorkers be willing to ride the subway, take a taxi or hire a private driver as they did before? Headlines here in New York already have mentioned a spike in bicycle sales. As New Yorkers re-think their transportation choices going forward in the wake of the coronavirus pandemic, the use of electric bicycles and electric scooters will undoubtedly become more common throughout the state. The new law’s regulation of their use bears watching. For example, it remains to be seen how the helmet requirement will impact the inevitable products liability lawsuits that arise when collisions occur. Now that use of the devices while intoxicated is expressly prohibited by the state and has been made a crime, will such use provide a distinct and available legal defense to product manufacturers? Guidance from the state’s existing case law regarding motor vehicle accident and motorcycle litigation will be needed.