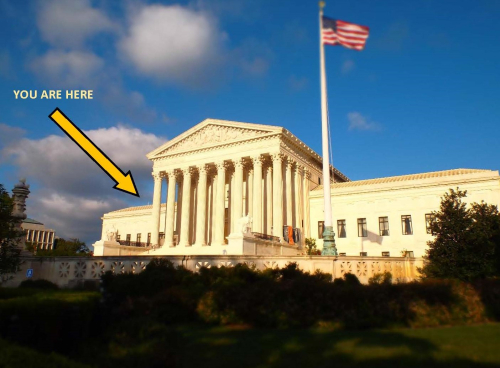 We have looked through the entire judicial and scholarly oeuvre of SCOTUS nominee Judge Amy Barrett, who today is continuing to run the gauntlet of the Senate Judiciary Committee. Naturally, our scanners were searching for any of her decisions or writings that might give us some clue how a “Justice Barrett” might treat takings and property cases, should she make the squad.

Frankly, however, there isn’t much to hold onto. As our colleagues Bryan Wenter (“What Might Supreme Court Nominee Amy Coney Barrett Mean to Property Rights?“) and Mike Ryan (“7th Circuit Rules Construction of the Obama Presidential Center Is Not A Taking Under The Fifth Amendment“) have covered, there’s just one opinion she authored or joined in which takings was on the docket: a recent decision about the challenge to the Obama Center being erected in a Chicago public park, Protect Our Parks, Inc v. Chicago Park District, No. 19-2308 (7th Cir. Aug. 23, 2020).

Short story of that case: the Barrett-authored panel opinion held that the citizen’s group plaintiff doesn’t have a property interest in the park, notwithstanding its argument that the public’s status as the beneficiary of the public trust (the real public trust, not, you know, the other things that get labeled “public trust” but really aren’t the thing you think about when you think “public trust”), is enough of a property interest to come under the Fifth Amendment’s protections (or, more accurately, the protections of the Fourteenth Amendment). The court rejected the takings claim.

Interestingly, although framed as a takings problem, the plaintiffs were not seeking just compensation. Instead, they alleged, in effect, this was a private taking. No public use or purpose (the beneficiary is the Obama Center). Yes, a  private regulatory taking. That’s giving us Agins/Lingle flashbacks. [Barista’s note: we still think the Court was wrong when it held in Lingle that the means-ends analysis (“substantially advance a legitimate state interest”) isn’t a question for regulatory takings. The Supreme Court instead relocated the inquiry to a due process venue. We argued in an amicus brief in Lingle that the substantially advance inquiry was grounded in the Public Use Clause, and recognized the ability of a property owner to challenge the purpose of the taking, even if the taking was a regulatory taking and not an affirmative exercise of the power of eminent domain. But the Court in Lingle was unanimous, so what do we know?]

We found it interesting that Judge Barrett didn’t really flinch at the plaintiff’s argument and like the property question, dismiss it on a threshold question (this isn’t takings, but due process), but instead tackled it on the merits, applying Kelo/rational basis:

Even assuming that the City’s use agreement with the Foundation qualifies as a transfer to a private party, the Supreme Court held in Kelo v. City of New London that a transfer to a private owner can still be constitutional if it is done for a “public purpose.”  545 U.S. 469, 483–84 (2005).  What’s more, the City’s judgment that a particular transfer and use has a public purpose is entitled to deference.  Id. at 488–89.  It’s hard to see, then, how we could “second-guess the City’s determination[]” that building the Center—with its museum, public library branch, auditorium, athletic center, gardens, and more—is a use with public benefits.

Before you put her in the “anti-property” camp by this decision, remember that as a Seventh Circuit judge, her discretion on whether and how to apply Kelo and other Supreme Court rulings is limited. Does this mean that a Justice Barrett would not favor revisiting Kelo or any of the other takings and property cases that elicit a lot of criticism from the bench, bar, and academy? After all, a lot of her scholarly writings were about stare decisis and whether precedent should be respected or overturned. Might she be willing to return to the eminent domain and takings issues that have caused so much grief, both in the public arena and down in the takings trenches? She has written that “Fidelity to the law means going where it leads, and sometimes it leads to the conclusion that a law is unconstitutional,” so maybe. 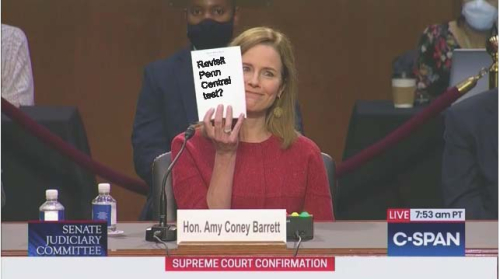 One final thought: where Justice Barrett might really be a game-changer is not as the fifth or sixth vote on the merits of a case, but as the fourth vote to grant cert. We get the sense that because one or two of the right-leaning Justices might “go wobbly” on takings and property cases, that there have been more than a few “strategic denials,” wherein an otherwise certworthy petition doesn’t get four votes to grant. Thus, rather than risk making bad law worse, the petition gets denied even though it raises a good issue. Will her being the fourth vote mean that petitions like these may get a fairer shake, and that we might see more takings-related cases being considered (esp a Just Compensation case, an issue the Court has not looked at in more than three decades)?

Stay tuned, this may get really interesting.