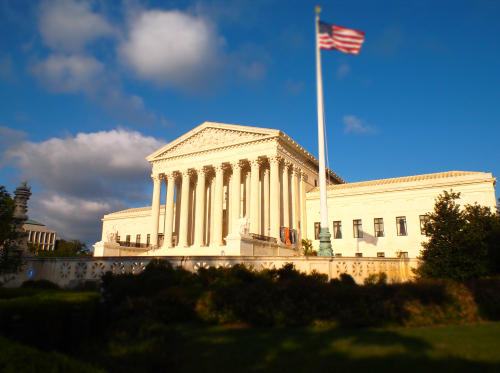 Today, Friday, November 13, 2020, is the day that the Supreme Court is scheduled to decide whether to decide a case we’ve been following for a long time (and one in which we filed an amicus brief urging the Court to take up the case).

In Cedar Point Nursery v. Shiroma, 923 F.3d 524 (May 8, 2019), a 2-1 panel of the Ninth Circuit affirmed the dismissal of a complaint for failure to plausibly state a takings claim under Twombly/Iqbal. At issue was a regulation adopted by California’s Agricultural Labor Relations Board which requires agricultural employees to open their land to labor union organizers. The regulation is framed as protecting the rights of ag employees to “access by union organizers to the premises of an agricultural employer for the purpose of meeting and talking with employees and soliciting their support.”

The Ninth Circuit panel majority viewed the complaint as alleging a Loretto physical invasion taking, but held the plaintiffs did not plausibly state a claim because they could not allege the invasion was permanent. The majority instead relied on PruneYard Shopping Center v. Robins, 447 U.S. 74 (1980), in which the Supreme Court concluded that the California Supreme Court had not effected a taking when it held that the California Constitution required shopping centers to be forums for public speech.

The issue: how “permanent” does a physical invasion have to be to qualify as a Loretto taking (or, more accurately here, how well does a complaint need to plead facts to show that the invasion qualified as a Loretto taking)? The Ninth Circuit panel majority and the en banc concurral pointed out that union organizers aren’t allowed on the property all the time. The panel dissent and the en banc dissental pointed out that it shouldn’t matter that the occupation by union organizers was not literally 24/7, merely that the property right allegedly taken was, you know, taken (government takes easements all the time and pays for that privilege).

To us, this fetish of the amount of time that an occupation is permitted or anticipated should not be the controlling question. After all, nothing is truly “permanent” is it? The cables and box on Ms. Loretto’s building could be removed, and the Arkansas flood waters receded. What the courts should be focusing on is whether the owner lost the right to exclude, no matter how long or short the resulting invasion lasted. Indeed, even if not a single union organizer ever enters the nursery property, it has the right to do so, and the owner doesn’t have the right to keep them out.

California law forces agricultural businesses to allow labor organizers onto their property three times a day for 120 days each year. The regulation provides no mechanism for compensation. A divided panel below held that, although the regulation takes an uncompensated easement, it does not effect a per se physical taking of private property because it does not allow “24 hours a day, 365 days a year” occupation. As an eight-judge dissent from denial of rehearing en banc noted, the panel “decision not only contradicts Supreme Court precedent but also causes a conflict split.”

The question presented is whether the uncompensated appropriation of an easement that is limited in time effects a per se physical taking under the Fifth Amendment.

Check out the list of amici (there are lots). Will the Court — now that Justice Barrett has rounded out the full contingent — “take” up this important takings issue?

We’ll let you know, as early as next week.