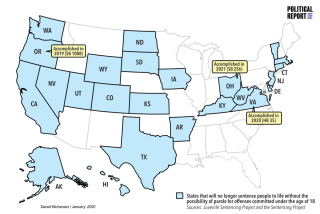 As mentioned in this recent post, Ohio recently enacted a new law largely banning life without parole sentences for juveniles.  Daniel Nichanian has this new piece at The Appeal: Political Report about the law and the national develops in this space. I recommend the whole piece, and here are excerpts (with links and the graphic from the original):

Ohio is expanding access to parole hearings for people who have been incarcerated ever since they were children.  It will no longer sentence minors to life without the possibility of parole, and it will significantly curtail sentences that effectively amount to the same.

Youth justice advocates are celebrating Senate Bill 256, which was signed into law by Governor Mike DeWine on Saturday, as their latest win in nationwide efforts to keep kids from spending their life in prison. The law is a “huge sea change” for the state, said Kevin Werner, policy director at the Ohio Justice & Policy Center, because “it recognizes that people change. … The heart of the bill is that Ohio values redemption over excessive punishment.”

SB 256, which is retroactive, only affects parole eligibility; it does not guarantee that people actually get released, even after spending decades in prison.  Under the new law, people who committed a crime as a minor will be eligible for parole after no more than 18 years of incarceration if the crime did not involve a homicide, or after no more than 25 to 30 years if it did.  That’s longer than in other states that have recently adopted similar laws….

Ohio is the 24th state, plus D.C., that will stop imposing sentences of juvenile life without parole.  A wave of states have adopted similar reforms since the Supreme Court ended mandatory life without parole sentences for minors in a series of early 2010s rulings.  Oregon, in 2019, and Virginia, in 2020, did this most recently.

Brooke Burns, who heads the Ohio Public Defender’s Juvenile Department, stresses that SB 256 will also help the state confront significant racial inequalities in its prison population.  “When we think about lengthy sentences, it’s overwhelmingly kids of color who are impacted by that,” said Burns.

These inequalities stem from disparate sentencing, but also the rate at which children of color are transferred to adult court in the first place, especially in counties such as Cuyahoga (Cleveland) that do so very aggressively.

The Appeal reported in 2019 that the office of Prosecuting Attorney Michael O’Malley has been transferring minors to adult court far more than other Ohio jurisdictions.  Ninety-four percent of those who were transferred to adult court in 2018 were Black.

Ohio’s Legislative Services Commission estimates that 50 to 60 people will immediately become eligible for parole when SB 256 becomes effective; this is approximately the number of people who have served at least 18 years, and in some cases much more, of the sentences they received when they were minors.  Many more will become newly eligible for parole in subsequent years.  The law will apply to most people who are serving outright sentences of life without parole, but also to people whose sentences are functionally equivalent since their parole eligibility was set so far in the future….

In Oregon and Virginia, the two states that most recently adopted laws to end juvenile life without parole, the state government is run by Democrats.  But SB 256 had to pass through Ohio’s GOP-run legislature — which it did with wide bipartisan majorities — and get support from the Republican governor.