Prenuptial and postnuptial agreements can be important documents when it comes to safeguarding your assets. Protecting your wealth is the main goal of the experienced attorneys at our law firm. Take control into your own hands and ensure the courts won’t be the ones to decide how your assets are distributed in the event of a divorce. Please see below for the most frequently asked questions regarding prenuptial and postnuptial agreements.

What is a prenuptial agreement?

As its name suggests, a prenup is a written and enforceable contract entered into by a couple prior to marriage. A prenup allows the couple to select and control a variety of legal rights they obtain when marrying. It can also control what happens when the marriage ends either by divorce or death of one of them. In certain cases, a premarital agreement could also specify waivers regarding a surviving spouse’s right to claim an elective share of the estate of the deceased spouse.

In the absence of a prenuptial agreement, the default marital laws of the state would apply in the event of divorce, such as the rules regarding the division of property, retirement benefits, savings, and alimony. Each state has its own laws regarding the validity and enforcement of prenuptial agreements. Which state’s law should apply to a particular case depends on where the marriage took place, where the couple was living during the marriage, and what law the agreement specifies should apply.

Are prenuptial agreements a good idea?

The demand for prenuptial agreements in the United States has increased in recent years, mainly due to millennial couples getting married. According to the American Academy of Matrimonial Lawyers, most lawyers saw an increase in prenups among millennials. This should not be surprising. Millennial couples are getting married later in life and tend to date longer before getting married. This means couples have longer to create wealth, accumulate assets, and think about what their goals and expectations are when entering into the marriage.

Millennial couples are also most likely to carry student debt. Without a prenuptial agreement to address this point, you may be left responsible for half of your spouse’s outstanding debt in case of a divorce.

When should I get a prenup?

Prenuptial agreements can be important when one individual in the couple has significantly more assets or income than the other. As stated earlier, they should also be considered when one or both individuals have significant amounts of debt and they would rather protect their future spouse from potential liability down the road. That being said, the discussion of a prenup should be raised long before the planned date of marriage. Ideally, both partners should have the opportunity to consult with separate legal counsel before committing to signing an agreement. Discussing a prenup shortly before the wedding date is strongly misguided, and in some cases, that fact could be used to overturn the agreement.

What assets will I be protecting in a prenup?

A prenuptial agreement can address all of the following matters:

What happens if I have a prenup and get divorced? 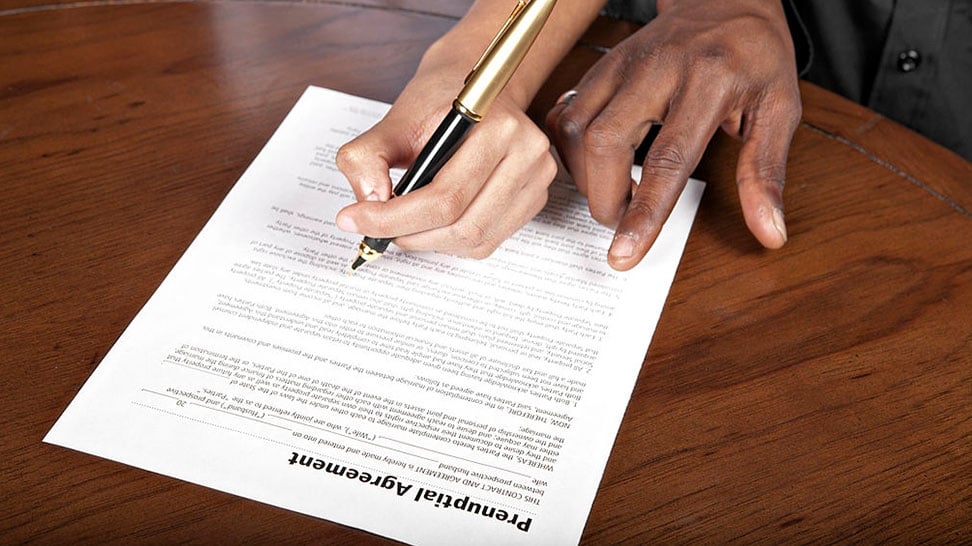 What is a postnuptial agreement?

A postnuptial agreement, also known as a “marital agreement” in Colorado, or postnup, is similar to a prenup however, it is entered into agreement after the marriage or civil union takes place. A postnup is for couples who intend to remain married and addresses the same matters as a prenup such as division of assets, finances, property, etc. and details what happens in the event of a dissolution of marriage through death or divorce in regard to spousal support. A post-nuptial agreement prepared in anticipation of or as part of the divorce process, can be declared unenforceable.

Is a postnup just as valid as a prenup?

On their face, both a prenup (before marriage) and a postnup (after marriage) are equally valid under the law. However, once you say, “I do”, a significant amount of both partners’ assets become marital property. The postnup should detail plans for these marital assets as well as future earnings.

What is marital property?

No. Most states do recognize common law marriage however, the length of time that needs to pass in order to be recognized will vary by state. Under common law marriage, each individual’s assets belong solely to each individual person. The only exception to this is if both parties’ names are on a legal title document for a home, vehicle, or account. Under common law, if one party passes away, distribution of assets will take place via the will, trust, or under probate.

The attorneys at Mile High Estate Planning are specialists when it comes to protecting your wealth. A prenuptial or postnuptial agreement can be an effective solution to ensure your financial wellbeing is safeguarded in case of divorce. If you would like to discuss whether a prenuptial or postnuptial agreement is right for your situation, please contact Mile High Estate Planning to schedule a free, no-obligation consultation.