Before The Pilgrims, The First Thanksgiving Was In St. Augustine. As woke activists challenge the Thanksgiving in Plymouth, Massachusetts as a symbol of early American settlers dominating the indigenous population, it is interesting to find out that the true first Thanksgiving was a diversely populated meal in St. Augustine, Florida in 1565. By 1621, the melding of the races had already begun in Florida.

“Historical eyewitness accounts describe the first Thanksgiving as a scene marked by diversity, with colonists and local Timucuan people in attendance. More than 400 artifacts left behind by the various cultural groups that made up the first colony are currently on display in the Florida Museum’s exhibit, “First Colony: Our Spanish Origins.””

Whichever tradition you favor, Thanksgiving is a time to give thanks in the present, and the continual savaging of the sins of the past serves no rational purpose, other than to divide us. Just stop it. And, thank whatever deity you believe in that you get to spend another Thanksgiving day on the earth. Your reaction to life is the only thing you control anyway. I choose to spend my day giving thanks for my wife, the turkey, football on television, and the other delights that await me today. You do what you want. 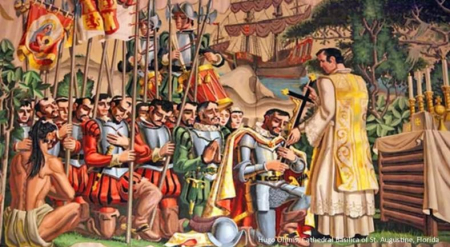