The U.S. Supreme Court’s 2014 decision in Alice Corp. v. CLS Bank (“Alice”)[i] has had a dramatic impact on the allowability of computer implemented inventions, especially in the finance arts (e.g. insurance, banking, etc.).  This series of articles explores the dynamics of that impact in different computer implemented arts as a useful guide to help patent practitioners navigate the new realities of post-Alice prosecution. In Technology Center 3600, art units 3691-3696 within Work Group 3690 examine applications in finance, banking and insurance (“Finance Art Units”).  These art units have been the most heavily impacted by Alice. 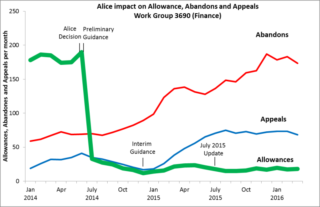 Figure 1 shows the total number of allowances per month, abandons per month and appeals per month for patent applications examined in Work Group 3690, from January 2014 to March 2016.  The data is from the USPTO’s public PAIR[ii] system.  PatentAdvisor™[iii] was used to collect and process the data. There are currently about 80 examiners in this Work Group.  The Work Group produces about 8400 office actions on the merits per year (i.e. nonfinal rejections, final rejections and allowances).  Prior to Alice, about 2100 of the actions per year were allowances (25% of the total actions).  Post Alice, only 220 of the actions per year have been allowances (2.6% of the total actions). Inventions in the finance arts are classified primarily as Classes 705/035 through 705/045, as well as 705/004 (Insurance)[iv].  The patents invalidated in Alice were all finance-related patents[v].  While it is not surprising to see that there was a substantial drop in allowances in the Finance Art Units, what is surprising was how fast the allowance rate dropped after the Alice decision.  The Alice decision was handed down on June 19, 2014, and six days later the USPTO issued a three page preliminary guidance memo that simply summarized the case.  The rate of allowances in the Finance Art Units plunged the very next week to a tenth of its pre-Alice value.  The median number of allowances per examiner in the two years since Alice is one.  That means that the typical examiner in the Finance Art Units has only allowed one case in two years.  Many have not allowed any.  A handful of examiners are allowing cases, but the vast majority are not.  Neither the Interim Guidance issued in December of 2014 nor the Update issued in July 2015 has had any measurable impact to increase the allowance rate. The drop in allowance rate has led to a predictable increase in abandons and appeals.  The abandon rate for applications in the Finance Art Units is up by about a factor of 3.  The appeal rate has more than doubled. While exploring the sharp drop-off in allowances, I discovered quite a few cases allowed before Alice that had their allowances withdrawn in July of 2014, about a month after Alice.  These withdrawals were announced by the USPTO on August 4, 2014[vi].  The allowed cases that had not yet issued were reviewed and those that were not considered statutory under Alice had their allowances withdrawn.  There was also a second smaller batch of post-Alice allowances that were withdrawn in October of 2014.  We refer these bulk withdrawals of allowances as the “July recall” and the “October recall.” 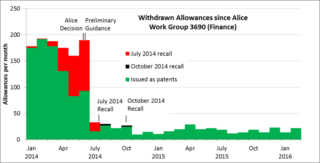 Figure 2 shows when the recalls occurred and which prior allowances were withdrawn.  It also shows the allowances that ultimately issued as patents.  After each recall, the cases were reassigned back to examiners and new 35 USC 101 rejections based on Alice were issued.  These new rejections came out over a period of several months. At the time of the July recall, there were about 405 cases allowed-but-still-pending.  Subsequently, 250 of these cases had their allowances withdrawn and 78 proceeded to issue on a normal schedule.  Another 77 had their issuance delayed until the end of December for reasons that are unknown.  The October recall was much smaller and different in scope, in that while only 5 allowances were withdrawn, all of them were post-Alice allowances.  In other words, while the examiners found the applications allowable under the new Alice guidance, they were overruled presumably by either an SPE or a Quality Assurance Specialist. The 255 recalled cases have not done well.  Only 11 have been allowed again, 66 have been appealed, 83 are still being prosecuted before their respective examiners, and 95, the largest subset, have been abandoned. The July recall had a powerful impact on examiners.  For most examiners, the only cases they have allowed since then have claims that incorporate “physical devices.”  I took a look at a random sample of 100 allowed cases to see what might count as a “physical device” in this work group.  About 90% of the allowed cases had a prior 101 rejection under Alice.  Most of these rejections were overcome by an amendment to the claims.  In about one-half of the cases, I could identify a limitation added by amendment that added enough of a physical limitation to overcome the 101 rejection.  A sample of these limitations is presented in the table below.

42% of the allowances I looked at involve claims with some sort of mobile or remote device; 19% had a physical sensor in the claims; 12% had a physical payment limitation; and 19% had a limitation related to a specific system structure.  Only 8% of the allowances I looked at seemed to be purely computer implemented business methods. For applicants filing cases now, the message is clear.  Incorporate a physical device into your claims.  For those pending applications that do not disclose a specific physical device, perhaps the best strategy is to direct the claims improvement in the functionality of the overall system, rather than a specific device. In our next article we will explore what is happening in the other business method work groups, 3620 and 3680.  These work groups cover the rest of business methods including accounting, online discounts, operations, electronic shopping, point-of-sale terminals, health technology, and cryptography.  Some of these fields show the same impact as finance.  Others show an initial drop in allowances, followed by an increase and then followed by yet another drop-off.  Still others have shown no impact of Alice at all.  We will explore these variations and see how this impacts applicant strategy.

[i] Alice Corp. v. CLS Bank Int’l, __U.S.__, 134 S. Ct. 2347 (2014). [ii] Patent Application Information Retrieval system. http://portal.uspto.gov/pair/PublicPair [iii] http://www.reedtech.com/products-services/intellectual-property-solutions/lexisnexis-patentadvisor [iv] After January 1, 2016, the USPTO no longer published the US Patent Classifications on issued patents, and instead used the Cooperative Patent Classifications.  However, applications are still assigned to art units based on the old USPTO classification system.  These are the classifications still used in PAIR. [v] US 5,970,479, US 6,912,510, US7,149,720 and US7,725,375 [vi] USPTO Commissioner for Patents, Peggy Focarino, “Update on USPTO’s Implementation of ‘Alice v. CLS Bank,’” Director’s Forum: A Blog from USPTO’s Leadership, August 4, 2014.

Mark Nowotarski is a registered U.S. patent agent specializing in business methods and consumer products.  He has had his own practice, “Markets, Patents & Alliances” since 2001.  Prior to being a patent agent, Mark was a  corporate research fellow for Praxair where he developed and patented green manufacturing technologies for the electronics, metals, food and healthcare industries.