A Cape Cod jury, after a scant one-hour deliberation, decided in favor of a Falmouth landowner who claimed that the Falmouth Conservation Commission’s refusal to grant variances from the Town’s Wetlands Protection Bylaw deprived her of all beneficial use of her 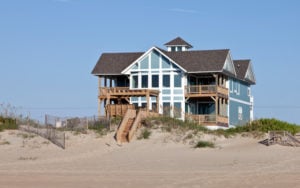 property. The jury in Smyth v. Falmouth Conservation Commission and the Town of Falmouth awarded Ms. Smyth the full amount of the decrease in her waterfront property’s value.  Successful regulatory takings cases are rare, and landowners and municipalities are sitting up and taking notice of this case.

By inheritance, Ms. Smyth owns a vacant lot in a 174-lot subdivision approved by the Falmouth Planning Board in 1968. Single-family homes have been built on nearly all of the lots.  Intending to build a retirement home, Ms. Smyth’s parents purchased the lot in 1975 before Falmouth adopted the Wetlands Bylaw and when construction of a single-family home was allowed as-of-right.

Several wetland resource areas are located on the lot, including a salt marsh and a coastal bank. Since the Smyth’s purchase of the lot, the Falmouth Conservation Commission adopted the Wetlands Bylaw.  As a result, by 2008 building a single-family home required that the Conservation Commission grant variances to allow construction within the “no disturbance” buffer zones of the salt marsh and coastal bank.  Without the variances, only 115 square feet of the 16,477 square foot lot is developable.  From 1975 to 2015, the Town assessed the lot as if it were buildable, 2015’s assessed value being $653,000.

In 2012, Ms. Smyth filed a Notice of Intent with the Commission which included a request for the necessary variances. The Commission denied her request and Ms. Smyth successfully obtained a superseding Order of Conditions from MassDEP approving her project, but the Conservation Commission continued to block the project.  Ms. Smyth then sued the Conservation Commission and the Town in Superior Court asserting that the Conservation Commission’s refusal to permit the construction of the house constituted a regulatory taking of her property and sought to recover the decrease in property value as damages.  During the five-day trial, the jury heard testimony from Ms. Smyth’s expert witness that due to the adoption and amendment of the Wetlands Bylaw since the time the Smyth’s purchased the property, the value of the lot decreased by about 92% from $700,000 to $60,000.  In their short hour of deliberations, the jury decided that the Wetlands Bylaw and the Commission’s subsequent denial of relief constituted a regulatory taking and awarded Ms. Smyth $640,000, plus interest.

In essence, the jury decided that the application of the Wetlands Bylaw violated Article 10 of the Massachusetts Declaration of Rights and the Fifth and Fourteen Amendments of the U.S. Constitution, as well as the guidelines set forth by the Supreme Court in the 1978 Penn Central case. To no one’s surprise, the Town has signaled that it intends to appeal the verdict.  Regardless, there is little doubt that state and local officials and their counsel have taken notice of the result and are  trying to determine how to best enforce their regulations without sustaining a similar result.